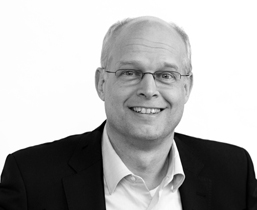 Paul van den Biggelaar is one of the entrepreneurs at Lavoisier. Paul studied electrical engineering at the Technical University Eindhoven. He started his professional career as a software architect at APT (later AT&T and Lucent Technologies). He fulfilled the role of Product Manager at Lucent Technologies in Andover (Ma., USA) and was responsible for R&D project management within three joint business units (more than 500 developers). Paul was responsible for all technology aspects during the construction of a network for one of Lucent’s top 10 customers.

As a member of the management team at Peek Traffic, Paul was responsible for the service department, with its large installed base of traffic equipment throughout the Netherlands. In this position, he made a major difference by increasing productivity and by conversion in the direction of total care management.

In 2005, Paul was Director of the Oncentra Business Unit and, in 2007, he became a member of the Executive Team of Nuceltron, the world leader in brachytherapy treatment solutions. In this position, he worked closely with both medical research institutes and with innovative high-tech companies around the world to create the most innovative solutions in hardware and software. In 2008, Paul was put in charge of product development at Nueltron.

Based on his experience at Nuceltron, Paul founded his own company, Think Through, in 2009. The goal of Think Through is to invest in the developers of innovative technical ideas as a co-entrepreneur, with the aim of turning these ideas into products and companies. One of its investment projects focuses on hyperthermia and is the basis for the cooperation with Lavoisier.